People from all walks of life live with scoliosis. Each story is unique. Each person’s decision about what course of treatment is right for them is specific to their spine. These people and their stories inspire. We could all use some inspiration.

The royal, who underwent life-changing spinal surgery at age 12, uses her social media to send an empowering message about beauty

Princess Eugenie is proud of her scoliosis scar — and she’s inspiring others to feel the same.

The royal used her Instagram stories to post a close-up picture of her back scar and those of some of her followers, all proudly showing off similar scars, having gone through the same life-changing spinal surgery for the condition.

In a heartfelt message, Eugenie wrote, “Earlier this year, I shared this pic of my scar. I was sent a lot of photos in response and I wanted to share some with you today as my #throwbackthursday.” Encouraging everyone to keep sending her their photos, she said: “Please share your stories with me where you have scars that show your strength. Scars are beautiful.”

For International Scoliosis Awareness Day in June, Eugenie had the idea to share personal photos of her followers on social media to help spread some positivity about the condition – on Thursday she kept her word, adding #gotyourback to some of the images.

While Eugenie, youngest daughter to Prince Andrew and Sarah Ferguson has opened up about her diagnosis at age 12 before, it was on her wedding day in October 2018 when she publicly showed off her scar, which runs all the way down her back, by wearing a low-backed wedding dress by British-based label Peter Pilotto.

“I had always wanted a low back – part of it was showing my scar and I believe scars tell a story about your past and your future, and it’s a way of getting rid of a taboo,” Eugenie told PEOPLE in 2019. “For me, it’s a way of communicating with people who are going through either similar situations with scoliosis or having a scar of their own that they are trying to deal with.”

The operation, which took eight hours, involved surgeons inserting eight-inch titanium rods into each side of her spine and one-and-a-half inch screws at the top of her neck. Eugenie was in intensive care at the Royal National Orthopedic Hospital for three days.

Since 2012, the royal has been a patron at the hospital, using her own experience to inspire others and a new facility, a residential space for parents and children going through treatment has been opened in her name. 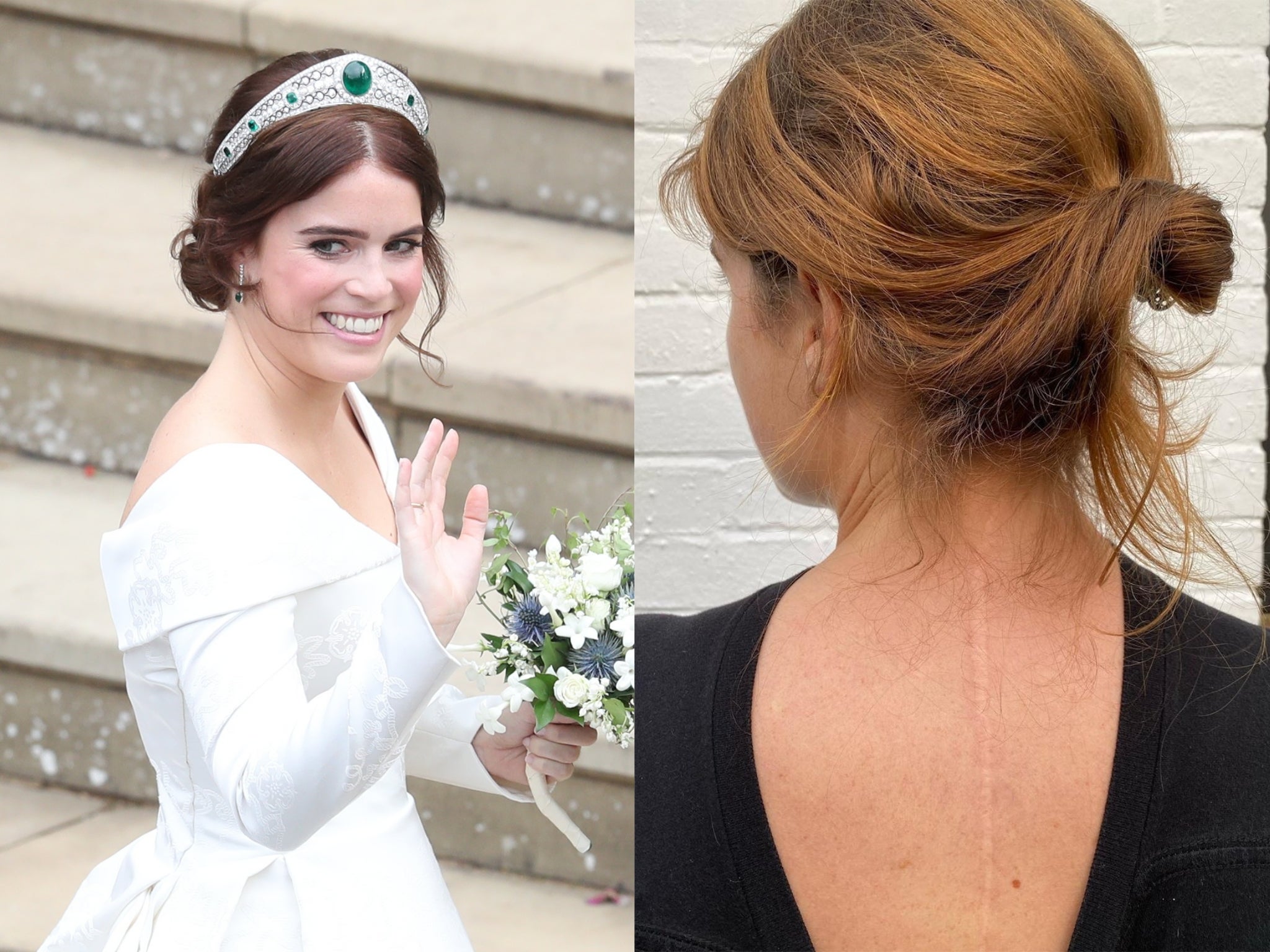 Martha Hunt: ‘Scoliosis is the driving force of my modeling career’

After undergoing a spinal fusion surgery to correct her scoliosis as a teen, Victoria’s Secret model Martha Hunt has built a brand that gives back 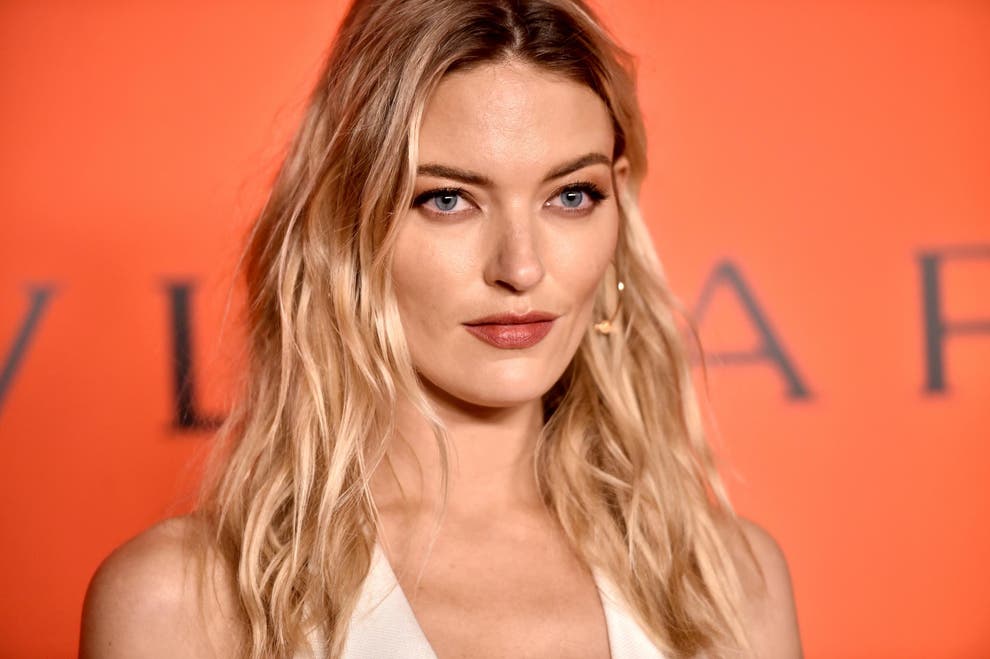 As a model for the likes of Victoria’s Secret, Miu Miu and Hugo Boss since 2013, Martha Hunt is used to being the face of a brand. But when she created her line, Inégal, Hunt found herself involved in every aspect behind-the-scenes, too.

“I’ve enjoyed learning this side of the business, but there was a learning curve in setting up operations,” the model told us about the fashion meets philanthropy line she’s been quietly developing for the past several years.

“There were so many new variables from producing products and coordinating design, building the site and social media, graphic design, customer service, and the overall streamlining of selling and shipping products domestically and internationally,” Hunt explained of what it took to successfully launch Inégal’s first piece in July – a limited-edition, unisex sweatshirt designed with artist Lindsay Adams, with proceeds that benefit scoliosis research.

One aspect that came easily to Hunt was determining the brand’s name, Inégal, which means “uneven” or “unequal” in French. The vision behind it to empower those with scoliosis while raising awareness about the condition and funds for research was even more obvious to the North Carolina native.

“Scoliosis has been a driving force throughout most of my life and career as a model,” the 31-year-old said of the condition, which causes the spine to curve. “I was diagnosed in my early teens around the same time I started modeling, and I didn’t know if modeling would remain a realistic possibility for me.”

After a spinal fusion surgery in her late teens helped to correct Hunt’s scoliosis (and allowed her to grow another inch taller), she moved to NYC to pursue her modeling career. Though Hunt stated she “was not an overnight sensation,” her portfolio has included print and commercial campaigns, magazine covers, runway shows, and perhaps most recognizably, being named a Victoria’s Secret Angel in 2015.

“Once I felt established enough, I started speaking about my scoliosis experience because I felt a responsibility to younger people dealing with the condition, and often privately,” said Hunt. “Growing up in a small town in North Carolina, I did not know other people affected by scoliosis, and public figures were not speaking about it,” she continued, adding, “I felt isolated in my feelings. Scoliosis and its complexities are very misunderstood so I’m committed to spreading awareness for it.” 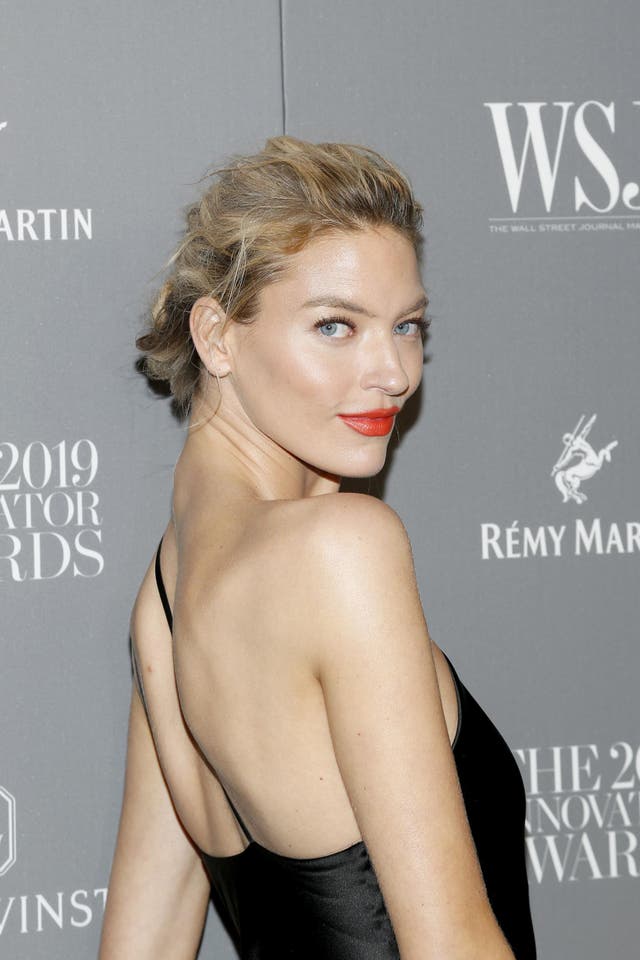 Ahead, Hunt shares how the idea for Inégal began, the details on her first collaboration with Adams and what she has planned for the future.

“Three years ago I partnered with Leah Stoltz, the founder of Curvy Girls for an awareness campaign for scoliosis,” said Hunt. The model helped to produce a photoshoot that featured 15 young girls and women with scoliosis showing off their scoliosis braces and spinal fusion surgery scars. It also meant that Hunt, who was a part of the shoot, would display her own scar.

“Initially, I was nervous, but it ended up being an uplifting experience to share with a strong community that I related to so effortlessly,” she said.

To complement the campaign, Hunt and her friend, Cannon Brendan, designed a necklace, with proceeds benefiting Curvy Girls’ work as a peer-led support group for young girls with scoliosis. Hunt searched for a symbolic word to engrave on the pendant necklace, stumbling upon the French word for “uneven,” Inégal, in the process. 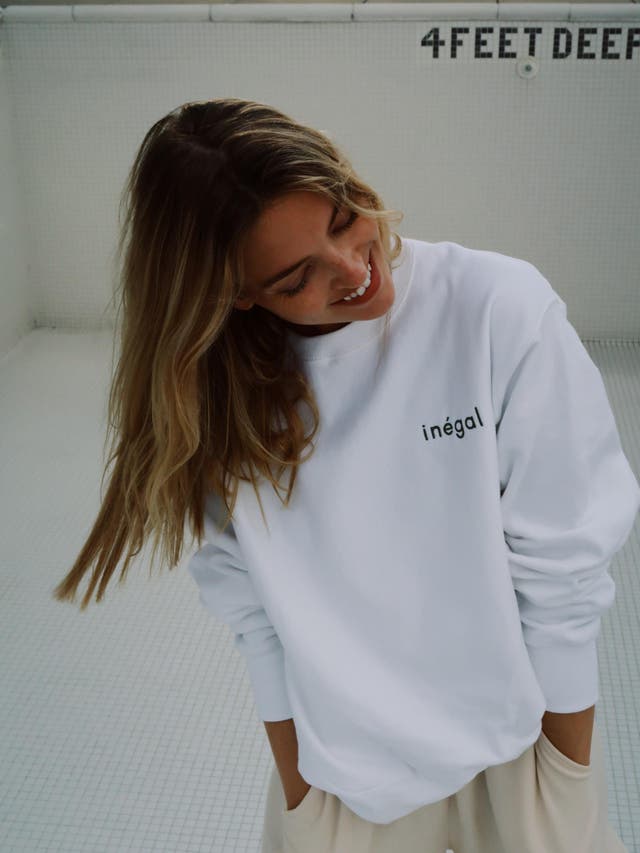 “The adjective “uneven” is familiar to anyone with scoliosis because the uneven spine also causes symptoms like uneven hips, shoulders and so on,” she explained. “One year after the photoshoot, we launched the Leah bracelet to continue supporting Leah’s organization,” Hunt added.

“Through designing and promoting jewelry for Curvy Girls, I saw the positive response from young people seeing scoliosis represented. I love that the jewelry pieces, like the new sweatshirt, are tangible items to give to anyone dealing with scoliosis treatment options like bracing or spinal fusion surgery – or just someone plainly going through a difficult time,” Hunt explained of why she sought to expand upon the initiative. 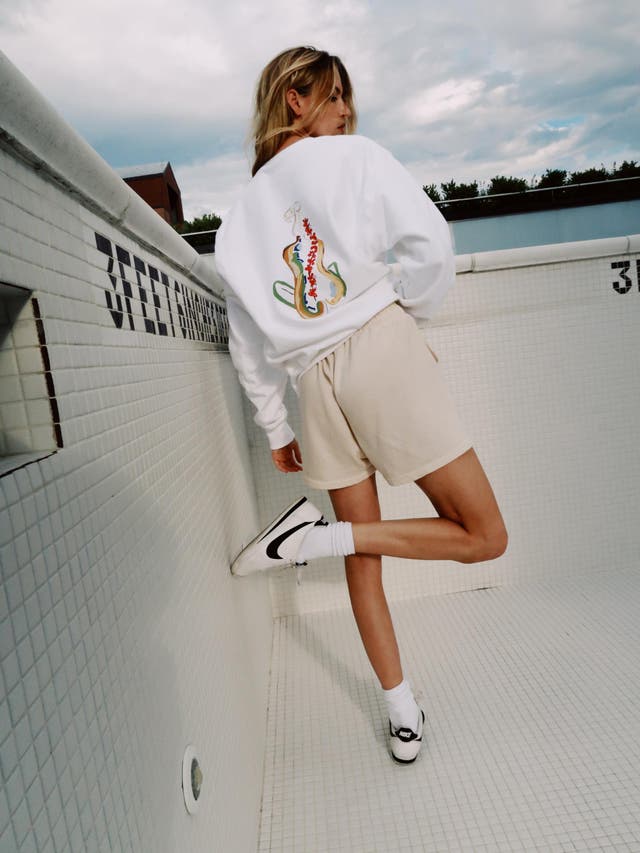 “I wanted to continue amplifying the message to make others feel seen so the ethos of the brand naturally evolved for a couple of years,” said Hunt, who went about registering the trademark. Developing plans for the first launch to donate all profits from its sales to scoliosis research, something she has been heavily involved with since 2016, was a must for the model.

“There are many disparities in scoliosis treatment costs, and they are especially disparaging on a worldwide scale. Additionally, there is not much visibility on how severe scoliosis cases are in low-resource areas across the world,” Hunt shared, noting that the condition, which predominantly affects women, can lead to paralysis or even death in severe cases when left untreated.

“This is a cause that is very personal to me because I’ve been helping search for sustainable solutions through research for the past couple of years in my free time,” she said. 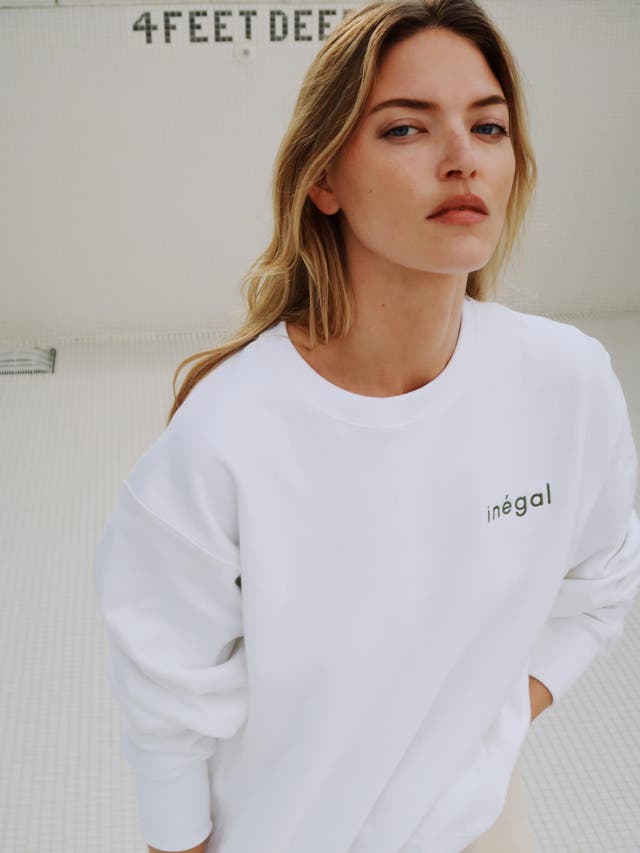 In April 2016, Hunt made a trip to Capitol Hill to advocate for increased NIH funding for orthopedic research in the hopes of finding methods for earlier intervention for scoliosis patients and non-operative treatments. There, Hunt met orthopedic surgeon (and scientist!), Dr. Sariah Khormaee MD, PhD, and the two struck up a friendship.

“In June of 2019, Dr. Khormaee and I asked social media followers to work with us on a research project, starting to define inequalities in global spine care that directly affect young women with scoliosis. All of the young women in our pilot project were deeply affected by scoliosis, but most of them did not have formal research training,” Hunt said.

“The goal of this project is not only to understand more about scoliosis but to teach young women – who are traditionally under-represented in spine research – how to apply research methodology to problems that matter to them.”

With that in mind, Hunt turned her attention to her first Inégal collaboration to help raise funds for her and Dr. Khormaee’s scoliosis research. “I was searching for artists to support through recommendations from friends when I came across Lindsay’s work and it immediately resonated with me,” said Hunt, who commissioned Adams to design the custom artwork for the sweatshirt, entitled Uniquely Uneven: Beauty In Differences. 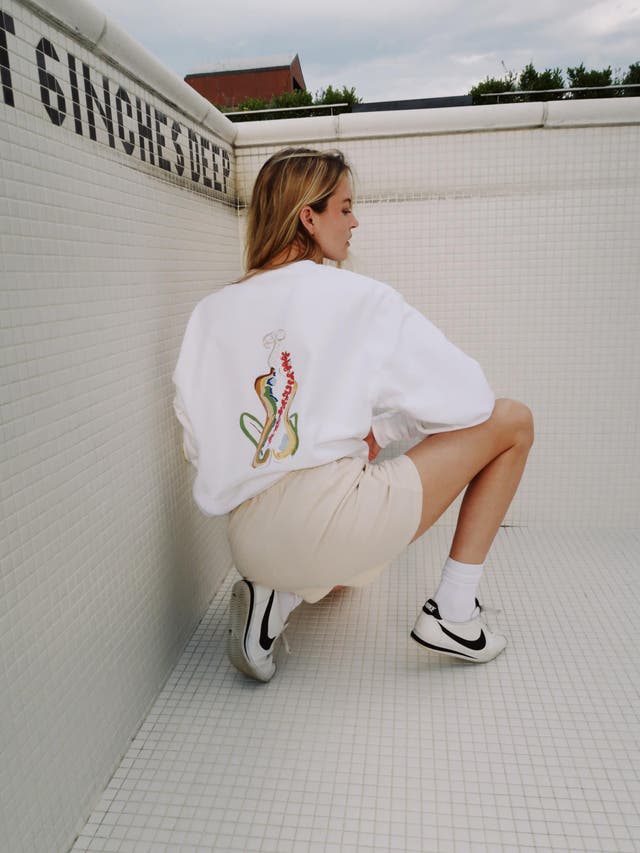 “Lindsay is a fine artist and illustrator, and often showcases women’s backs looking strong yet delicate at the same time. When I asked Lindsay to collaborate, I discovered that she is an outspoken advocate for cerebral palsy,” she noted. “Children who suffer from cerebral palsy have a much higher chance of developing scoliosis,” Hunt added of the “instant synergy” behind the collaboration.

“She finds beauty in what makes her different, which is exactly what I wanted to portray. I asked for her to express her own interpretation of resilience, which she conveyed through the textures and layers of the print. I felt emotional reading and listening to her stories about living and working with cerebral palsy. In light of the countless odds stacked against her, she is as equally talented as she is resilient,” said Hunt.

In addition to 100% of the sweatshirt’s profits benefiting scoliosis research, Hunt has also noted that every customer will be kept up-to-date as to what their contribution has helped to fund.

“I’ve learned how dedicating time can be more valuable than donating money, and I hope to use my influence to lead by that example,” she said of the work she’s put into Inégal. 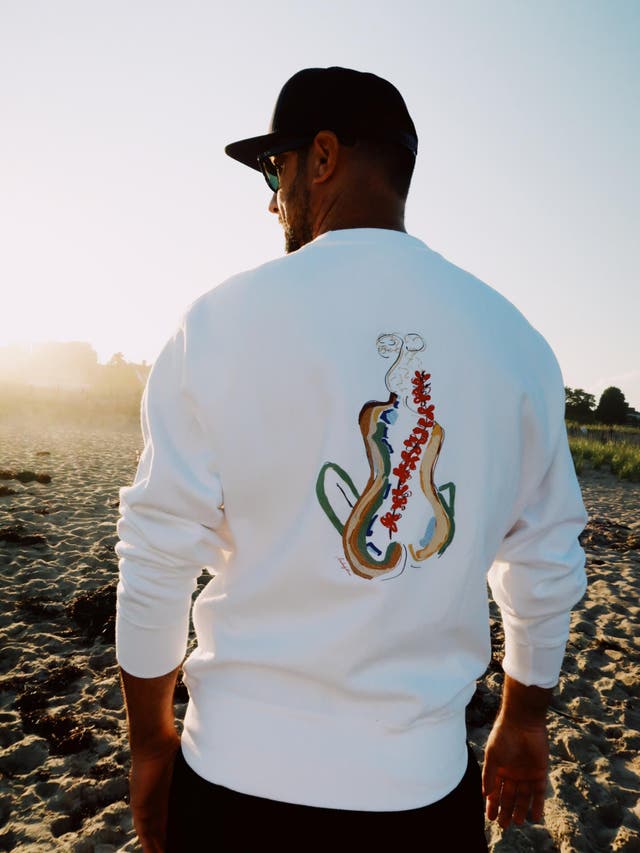 With Hunt’s first launch announced as a limited-edition piece and the brand’s overarching message to be one of empowerment, it seems like more collaborations spotlighting other charitable organizations could be on the way.

“I certainly see the potential in Inégal’s message to transcend scoliosis,” Hunt said about the possibility of championing other causes in the future. “Although Inégal technically means “uneven” or “unequal,” I see it ambiguously – it can mean anything to anyone. Now more than ever, many of us feel uneven mentally and physically,” she noted.

“There are many initiatives worthy of support that do not get the attention they deserve. I’m open to collaborating for different causes with authentic artists creating from the heart. I have some ideas to further support equality and mental health platforms,” Hunt said. But she’s not giving away any details just yet. “Until then, you’ll have to follow along and stay tuned.”